I bring good news for those of you fortunate enough to be within spitting distance of a Sayers or Hampsons bakers. 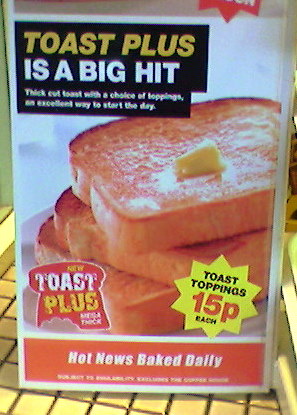 Introducing new “Toast Plus”, a bold and startling innovation. Just in case, whether through failing eyesight or sheer laziness, you are unable to read the accompanying photograph (left), “Toast Plus” re-imagines the humblest of breakfasts by offering the delighted consumer the possibility of “thick cut toast with a choice of toppings”. Interested? Better still; each topping retails for a mere 15 pence each.

I’ll level with you. I really don’t think that coming up with the concept of selling toast and toppings is worthy of branding the whole experience “Toast Plus”, still less of designing a little accompanying logo of a stylised half-eaten slice of bread. I always thought that toasting some bread and slapping on some spread and jam was a pretty open-sourceish, public-domainy kind of thing. Just what have the bakers done to claim it as their own? Should they really be troubling the patent office? Sure, they boast of their toast being “mega thick”, but that is an option only denied most of us because of the tyranny of the sliced loaf that some of their fellow baking brethren have foisted upon us.

I am not disparaging bakers in general, I acknowledge that they are vital to the production of bread, which is an important ingredient in toast; but if we allow one of their number to get away with this, then we can only imagine what could happen next…

Air™A refreshing blend of Nitrogen and Oxygen, with just a hint of Argon. Perfect for that early-morning pick-me-up, when taken copiously whilst exercising, or for just everyday breathing.

5 Comments to “Raise A Toast”